How to tell written Chinese, Japanese and Korean apart How is the Korean alphabet different from Chinese? Is Japanese written with Chinese characters? To many Westerners, the three languages are all but indistinguishable on paper.

After reading this post, you should have no problem telling Korean, Japanese and Chinese apart.

When it comes to computers, the Chinese, Japanese and Korean are often grouped together under the acronym CJK, and for a reason.

While they are linguistically unrelated, all three can be written borh horizontally and vertically, and all three use Chinese characters—hànzì in Chinese, kanji in Japanese, and hanja in Korean—which is one of the reasons for the confusion.

Let’s look at the difference between Japanese, Chinese and Korean and see how we can tell them apart without learning any one of the languages.

The Chinese language is the only to rely on this script entirely, and even then, at least two different versions are in active use across the world; traditional and simplified.

Below is the first sentence of the Wikipedia article on colour orange in hànzì:

Moving on to Japanese, the language has the highest number of official scripts in the world.

Kanji—Chinese characters—are used for most words of Chinese and Japanese origins. Hiragana—the curvy, feminine script—was originally used by women, but is now the main building block of the Japanese language, employed both for vocabulary and grammar.

Katakana—the manly, more angular script—is used mainly for loan words, onomatopeia, and transliteration of foreign words. Finally, romaji—the familiar Latin script you are used to from English and other Western languages—can be found everywhere, from product packaging to company names.

Below is the description of colour orange, employing katakana, hiragana, and kanji, all in the same sentence:

As you can see, due to its use of hiragana & katakana, Japanese is slightly more airy and spacious than Chinese.

As a general rule of thumb, unlike Chinese and Korean, Japanese also doesn’t use any form of question or exclamation marks, but you may still meet them in some situations.

The Korean language, in mid-15th century, transitioned to hangul—the only script in the world made by an individual, for which the theory and motives behind its creation have been fully set out and explained.

Hangul is known as one of the most scientific writing systems in the world, and is neither based on ancient written languages, nor an imitation of another set of characters.

In South Korea, you can still meet hanja—Chinese characters—every once in a while, but the script is quickly becoming obsolete.

Notice the many circular shapes used in hangul—these are almost non-existent in the other two languages and so make the script easy to recognize.

Also, unlike Chinese and Japanese, Korean has completely adopted European punctuation marks, from commas to question marks, and space-delimits words and sentences.

A good strategy when it comes to distinguishing the written form of South-East-Asian languages is: 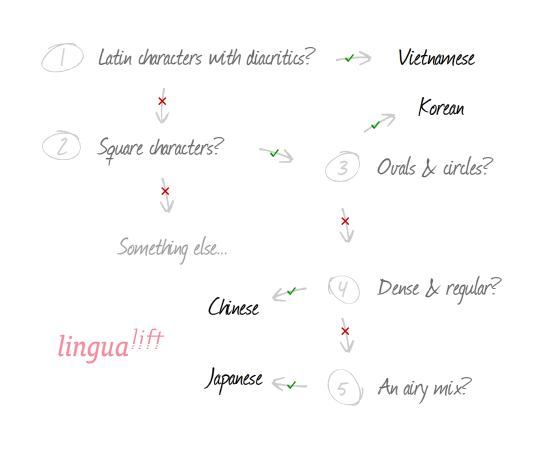 As you can see, you don’t really need to learn the individual languages to distinguish between them. As is often the case with linguistics, it’s all about pattern recognition, something we humans happen to be impressively good at!